New Zealand’s largest city -- and the world’s largest Polynesian city -- sprawls across an isthmus positioned between two harbors. The City of Sails boasts more boats per capita than any other and draws Kiwis with top surf spots and cultural charms. In the Parnell area, peruse art galleries, antique shops and cafes housed in restored Victorian buildings or venture to the harbor for a leisurely cruise or exhilarating jet boat tour. Just a ferry ride away, Waiheke Island is dotted with beaches and vineyards. Nearby Rangitoto Island is the youngest but largest of the Auckland area’s 48 volcanic cones, and a trek to its summit rewards hikers with 360-degree views of emerald seas. Some excursions introduce cruise passengers to Maori culture, while others head to sheep farms for a glimpse of New Zealand’s rural life. Hobbiton enchants fans of “The Hobbit” and “The Lord of the Rings” movies, and below the village of Waitomo, a series of caves radiate a glittering blue light due to a rare glowworm species. 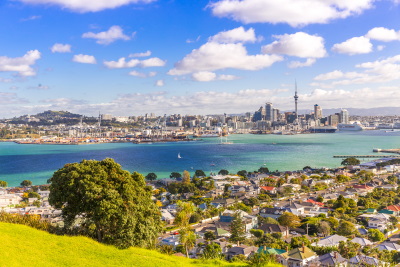 Exiting airport, turn left at the first set of traffic lights onto George Bolt Memorial Drive. Continue on that road which runs into the motorway route 20. Exit the motorway at Queentown Road Exit and turn first right onto Queentown Road. Go through roundabout, and up the hill. You are now on Route 12. Follow Route 12 all the way into the city (clearly sign posted) Turn left onto Alpers Avenue and then right at the end of the road. Turn left onto the motorway on-ramp. Take a second off-ramp (Symonds Street Exit) which will take you to the heart of the city. Follow Symonds Street down to the very end, past Auckland University. This road runs into Anzac Avenue. Follow Anzac Avenue until the last set of lights. Turn left into Customs Street. Follow Customs Street until Commerce Street. Turn right into Commerce Street and at the end of Commerce Street turn left into Quay Street. Queens Wharf and Princes Wharf are both located on Quay Street.