As the birthplace of Christopher Columbus, Genoa played a significant role in the European Age of Exploration. Most tours visit the home where the navigator and colonist was born, along with landmarks like the Cathedral of San Lorenzo. Wander the medieval alleys of the historic center, marvel at the frescoes and tapestries in the Palazzo del Principe and admire the architectural masterpieces along Via Garibaldi and Palazzi dei Rolli. For panoramic views of the area, the Art Nouveau lift transports you to the observation platform, Spianata Castelletto. One can’t-miss attraction is Europe's largest aquarium, a nearly 300,000-square-foot facility that hosts dolphins, penguins, seals, sharks and more. No visit to Genoa is complete without a stop in the commercial hub of Piazza de Ferrari, which features an iconic bronze fountain. Within daytrip distance are Milan, with its designer boutiques, and Portofino, a fishing village known for its pastel-colored houses. 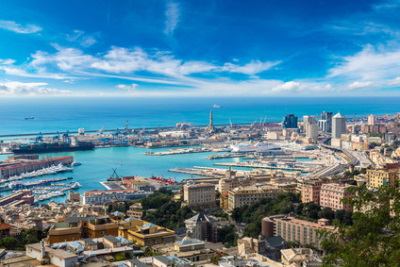 Driving from Malpensa: Take highway to Milano (50-60 Km). Follow signs and exit at Genova-Bologna. Follow signs to exit indicating Genoa. The exit for the port is Genova Ovest. There is a toll at this exit. Follow signs that say Porto and this will take you to the port.